March Madness and More Basketball in the Classroom

We're smack in the middle of the college and NBA basketball seasons, and a lot of us wish our teams were doing better. With March Madness and the NBA playoffs around the corner, a lot of our kids are going to be excited about basketball over the next month or two. And if there's one thing I love, it's taking what kids are into and turning it against them, educationwise. But in a fun, delightful way. Here are three ways to use basketball in your classroom this spring:


I don't watch a whole lot of sports. Shocking, I know. Part of it may be that growing up in Salt Lake City, we didn't have Major League Baseball, we didn't have an NFL team...but we did have the Utah Jazz. Like every team, they've had new uniforms every few years, so that Nike can make a buck and so we can complain about how the New Uniforms Aren't As Good As The Old Ones. Because we're human, and we have an internet. 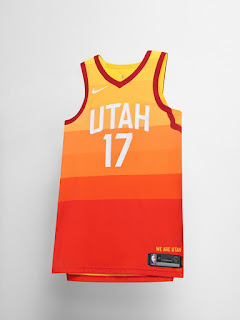 Last winter though, something entirely different happened -- Nike decided to put out some City Jerseys. Every NBA team got the chance to reimagine their uniforms in a tribute to the city that they're in. For some, it was about the geography of their community: the Brooklyn Nets are still black with white lettering, but there was a subtle pattern in the black mimicking the lines of the Brooklyn Bridge. The Washington Wizards had the Washington Monument built into the script of their team name, with a marble pattern on the sides of the jersey. Other teams paid tribute to the team history itself: the new Lakers jersey had a black snakeskin pattern, giving props to Kobe's "Black Mamba" nickname. The Celtics jersey had a pattern reminiscent of their parquet court. The Utah Jazz (I'll get more to the awkwardness of that team name in a bit) wanted to do something that represents not Salt Lake City (where the team plays), but the entire state of Utah. So we ended up with sandstone-inspired jerseys, complete with a rocky cliff built into one side. At first glance I hated them, but they're growing on me.

The teams put together videos explaining their design choices, and reflecting on the history of their community, team, and culture. Being a longtime Utah resident, the one for my own team was a tearjerker.

The jerseys have inspired a lot of controversy, and every possible sports blogger has their take on the good, the bad, and the ugly of each of them. And no one agrees on much, except that the Philadelphia 76ers probably win with their parchment-colored, old-timey cursive jerseys that remind us of the Declaration of Independence. I mean, for reals. 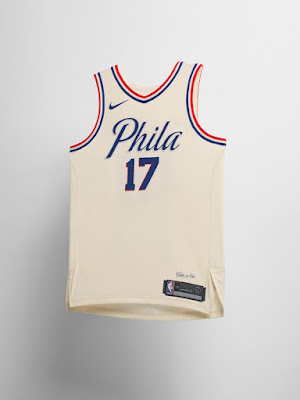 I wrote the paragraphs above last winter, with the 2017-2018 jerseys -- this season (2018-2019) several teams have come out with even more newerer ones, and you can see those here. Some of my favorites -- Oklahoma City Thunder paying tribute to their Native American history, the Houston Rockets and Golden State Warriors drawing on their Chinese heritage, the Bulls have the Chicago city flag, and the Minnesota Timberwolves to Prince. Yeah. Prince. 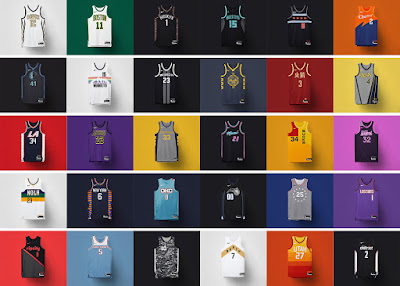 What if we had students design their own jerseys to represent their communities? Would they want to stick with something subtle, or go more outrageous? Would they pay tribute to an individual player? To their state? To their neighborhood? And why would they make those choices? I love watching students go through the design process, and seeing what they put of themselves into their products. A few examples I showed the students: 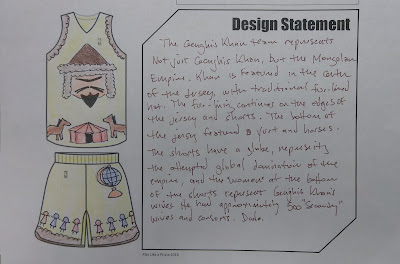 Design elements include "fur lined" armhole-not-sleeves-I-don't-know-what-those-are-even-called, a stylized Genghis Khan, horses and yurts, a globe representing world domination, and some of Khan's 600+ wives-and-consorts. 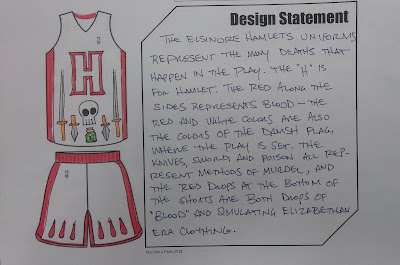 This uniform is based on "Hamlet," because you can do these with Not Social Studies content too. So you've got the giant "H" for Hamlet, Yorick's skull, and knives and swords and poison for the various ways people die in the play. The red and white represent blood and the Danish flag, and the teardrop shapes at the bottom of the shorts are both drops of blood and meant to mimic the puffy pant-things of the Elizabethan era.

And then their own work, based on the New Deal of the 1930s -- we talked about what the New Deal program was, learned something about eight of the most important ones, and then they chose one of the eight to focus on. If you're using a strategy like this, it typically works best when there are several different things that are all related to choose from. As with most "fun" strategies (HEY BUY MY BOOK FOR LOTS MORE STRATEGIES), it's also great to use with content that might not be as interesting to students as a way to hook them. I mean I think the Great Depression and New Deal are incredibly engaging on their own, but uhhhh that's why I became a history teacher.  The teachers down the hall from me are trying this with "forms of government" this week. But here are some of my kids' New Deal jerseys: 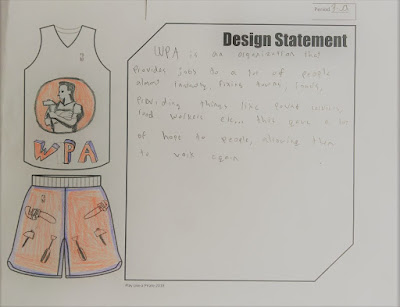 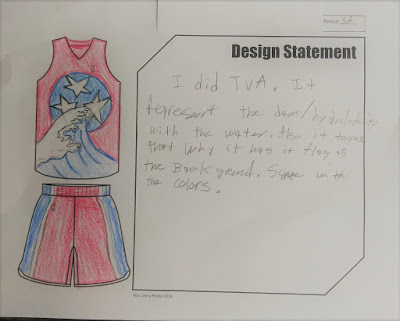 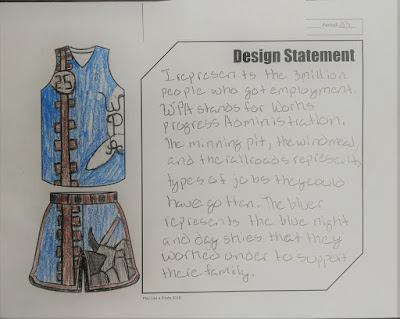 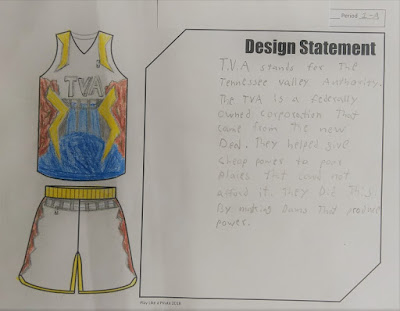 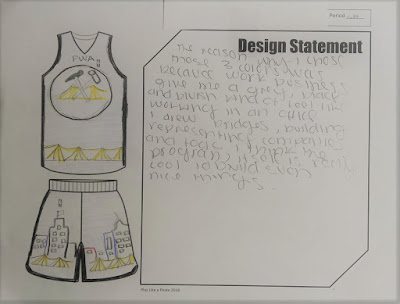 As with other design strategies, it's important to have students be able to explain why they made the choices they did. There's often more thinking happening than is evident to me as the dumb adult, so whether it's through writing, or verbally, or in a presentation pitching the design to others, make sure that's in the mix somewhere.

Here's a link to a Word version of the template (easy to edit yay) or a PDF if you're satisfied with this one. Aaaand to the very short and simple PowerPoint that I used to introduce the activity. 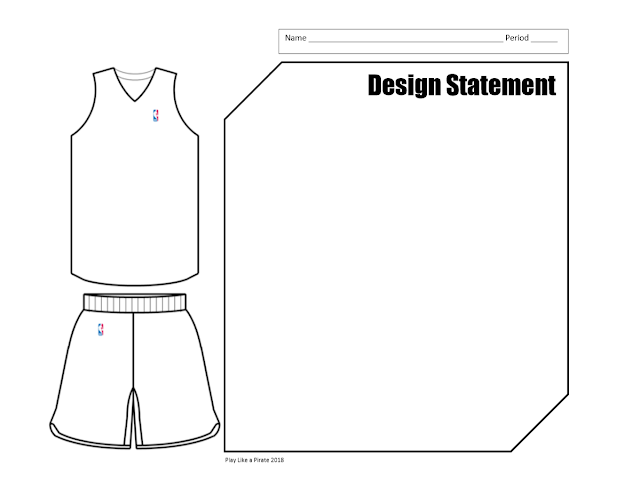 UPDATE 2/11/19 -- At the request of several teachers in the Twitterverse, here are additional templates for football, soccer, baseball, and hockey.


I'm a fan of using the bracket system to put competing ideas against each other. It's exciting to see who gets eliminated, who stays in the race. My weird friends even have a Muppet Madness tournament every March. In the classroom,kids get to advocate for their own side to win, and as in March Madness, soon your class will devolve into a betting pool that will have children auctioning their mother's pearls for a piece of the action. Just what you always wanted.

Instead of writing something new up and saying look how handsome awesome I am, here are some of the ones I've found online that have some clear classroom implementation:

From We Are Teachers: Book Bracket

From Nuskool (really? come on.) : March Mathness: Using Probability to Creat the Perfect Bracket (taking away points for spelling it "Nuskool," but they make up for it with "Mathness.)

Cool ideas, and each is a relatively easy set-up for a long term project that kids will get excited about.


As a social studies teacher, one of the things that fascinates me about the NBA in particular are the names of the teams with specific geographic connotations. The Denver Nuggets, named after the gold and silver rushes; the Chicago Bulls, since it was the meat capital of the world; Boston Celtics for the Irish, New York Knicks for the "knickerbocker" pants worn by the Dutch in the area. What's even better, though, are the teams that started in one city with a geographic nickname that made sense, and then moved to a new city, but kept the same name. Which now makes...less sense. The Vancouver Grizzlies moved to Memphis, where grizzlies haven't been seen...well, maybe ever. The Minneapolis Lakers moved from the Land of Ten Thousand Lakes to Los Angeles, Land of...they may have Land O' Lakes Margarine. I don't know. My favorite example of course is the aforementioned New Orleans Jazz, who moved to one of the non-jazziest places in the country, Salt Lake City, Utah. There's a great article on how the NBA teams got their names over at Mental Floss.

Major League Baseball and the NFL both have their own team names with history and some with quirks -- the Los Angeles Dodgers started out the Brooklyn (streetcar) Dodgers, for example.

Having the kids do research about where teams got their names and why is great, and would be a relatively easy reach for most students. Taking it a step further, how could you rename a local team to more accurately reflect the history of the community, or a different part of history? Salt Lake City's minor league baseball team is the Bees, because Utah is the Beehive State and blah blah, but other iterations of that team have been the Trappers and the Gulls, both based on other parts of Utah's history and state symbols. Having students come up with  new name for a sports franchise, and being able to support the reasons for that choice, would be an engaging way to get them doing research and writing during the basketballiest time of year.